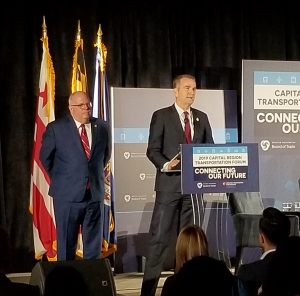 The Alliance applauds Governor Hogan and Governor Northam for working together to address one of the region’s worst bottlenecks.

This agreement exemplifies the importance of regional collaboration and public-private partnerships in solving our region’s transportation challenges.

Expanding the American Legion Bridge and the regional express lanes network have been long-standing priorities of the Northern Virginia Transportation Alliance. These improvements will:

It is the only bridge connecting Fairfax and Montgomery Counties – the two most populous jurisdictions in our region and home to nearly 40% of the region’s population and jobs.

For more information about the American Legion Bridge and why we need to improve it, visit the Alliance’s website at https://nvta.org/priority/american-legion-bridge/