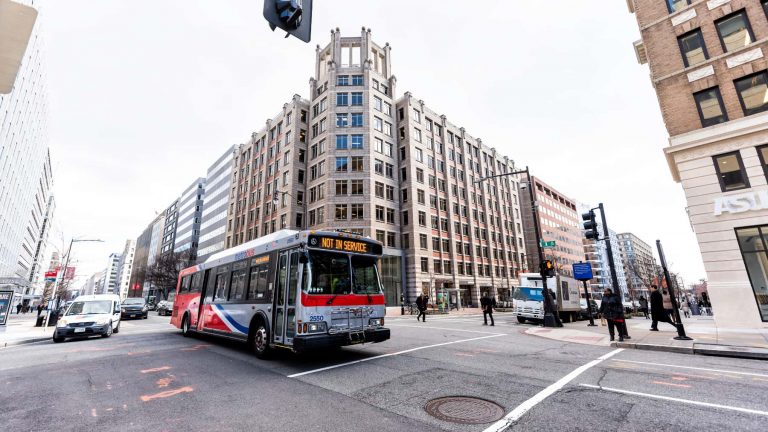 The Alliance recommends the creation of a regional express bus network to provide direct connections to major employment centers, as a supplement to the existing Metrorail network, by adding managed lanes to the I-66 corridor, I-495 across the American Legion Bridge to the I-270 spur and other major corridors to add to the managed lanes already in place on I-95/I-395, 495 and the Dulles Corridor/VA 267.

The metropolitan Washington region has one of the highest, if not the highest, rates of inter-jurisdictional and interstate travel in the nation.

Virtually all of the region’s major activity centers with rail transit supportive densities are currently served by Metrorail.

Most future suburban densities are unlikely to reach transit-supportive levels. The region’s dispersed settlement patterns lend themselves far more to express bus service, which will be not only faster, but more flexible and affordable

From its founding the Alliance has supported construction of the planned Metrorail system and Virginia Railway Express commuter rail network.

However, with these networks in place or nearing completion the Alliance believes the above realities make a regional Express Bus service on dedicated lanes a far better future investment of capital transit dollars than expansion of fixed (light or heavy) rail.

The Alliance is not alone in this view.

In 2013 a coalition of District, Maryland and Virginia business leaders (The 2030 Group) commissioned a group of transportation experts to study the potential benefits of those highway and transit projects rated highest by the 2011 survey of public and private sector transportation professionals.

Services and corridors in this analysis included:

In 2012 the Virginia Department of Rail and Public Transportation (VDRPT) released its NoVA Transit and TDM Plan to examine ways to provide “safe, strategic, and seamless mobility options for rail, transit, and TDM in the greater northern Virginia region.”

The Plan studied and made recommendations in a wide range of areas including:

The Plan looked at a number of long-distance express bus networks/services that would be primarily intended to serve long distance work trips in the peak AM and PM directions. These services would use existing and future express and HOV lanes. In some cases general purpose lane use is assumed. However, it remains to be seen the extent to which reliable, time-efficient service could be provided in conventional lanes. Specific recommended corridors/segments/services included:

As is so often the case, when the plan was completed no funding existed to implement its recommendations.

Additional observation: Given that this was “collaborative study” involving many jurisdictions and “stakeholders/interests” the exercise cast a broad net identifying a wide range of possibilities without attempting to identify those most likely to make the greatest difference, or be the most cost effective.